Night Of The Living-Dead Sales Letter… 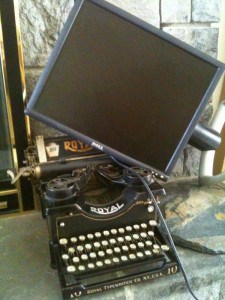 They killed the sales letter again!

Will this horror never stop?

Actually, you can relax.  Just like Kenny in South Park, the traditional sales letter is on some kind of perverse “Permanent Hit List”…

Huzzah! Death to you, vile long-copy sales letter!  Take that… and that…

This latest round is clever as hell, too.  The new trend is putting your sales letter in a video, and reading along with it.

The irony:  The dude selling you the “Magic Box” product that kills the sales letter forever…

… uses a sales letter to do the killing.

Hey — don’t get me wrong.  I love video.  Been using it in marketing since… well, since it was actual videotape on reels.  (Yeah, shocking, I know.  We were so backward in the last century.)

In fact, the “Magic Box” product I’m talking about is, I’m guessing, an excellent solution for many marketers who can’t figure out how to make a video sales letter work.

And all’s fair in love, war and advertising.  So all the dudes out there telling you the sales letter is dead, and you can sell without selling, and the Web has changed everything…Read more…

I’m gonna be flat-out honest with you: I’m freaking exhausted.

The “17 Points” workshop is in the can, but it took a piece out of us to pull off. Three entire days, morning to evening, locked in mortal combat with Truth, Insight, and The Path To Riches & Spiritual Fulfillment.

But grueling. In that “everything got revealed (and then some)” way.

I’ll be sharing more of what exactly was shared at this one-of-a-kind event later… but for now, I just want to gloat a bit.

I mean… NO ONE else puts on events like this. I honestly believe hosting one of these marathon teaching workshops would kill your average guru. Even the ones half my age. Just curl ’em up and leave a singed hulk trailing wisps of bacon smoke.

You really shoulda been there, you know.

Oh, wait… you were invited. But you missed out on your spot by not gaming the auction, didn’t you.

Ah, well. I’d say “next time”, but without an act of God (like the video spontaneously combusting), there won’t BE a next time. My entire career was metaphorically aimed at this one single in-depth workshop… and I pushed myself as hard as I’ve ever pushed.

And I ain’t never giving it again.

It was just too exhausting.

Have you ever stood on your feet for three solid days, keeping your mind completely engaged, in fever-pitch mode… working without a net, in front of appropriately-greedy people who have paid big bucks for the opportunity to suck every scrap of wisdom from your skull?

I can’t say I recommend it.

Other folks put on big damn seminars with a mob in the audience, and as impressive a line-up of speakers as they can bribe or cajole into showing up. The actual host is onstage for only a short amount of time. He’s more of a ring-leader and MC.

I like that model fine. It’s a good way to present a lot of stuff to a lot of people.

But my DNA just won’t allow me to host that kind of event.

I cut my teeth, long ago, with Halbert, doing intimate and shockingly-interactive seminars with relatively small groups of people… most of whom were highly skeptical of the whole scene. We had no script, no “battle plan” for how to proceed, no clear idea of what was gonna happen from hour to hour… and it was just us on the stage, with little or no backup.

And we liked it that way.

It was theater-meets-the-barroom-brawl time. We took each attendee through their paces, and kept the entire event utterly and completely focused on real-world solutions to the actual marketing problems they brought to us.

No theory. No bullshit academics. No clever speeches. And no pitching.

Once you get a taste for that kind of impromptu action, “regular” seminars full of talking heads seem boring and nowhere near dangerous enough.

My seminars are always small, always unpredictable, always pumping adrenaline and endorphines… because the live, unrehearsed, uncensored interaction of host-and-attendee IS dangerous and exciting.

Hey — the action kept me going for three packed days.

Kept the attendees on their toes, too.

It was a raging success, by all metrics.

But I’m never, ever, doing it again.

Still, I’m sitting here laughing out loud, remembering some of the stories we pulled from the extended weekend. It was great having my long-time buds David Deutsch and Garf (David Garfinkel) as wingmen, watching my back from the audience. The hotel was perfectly placed between Chinatown and North Beach (where Kerouac and The Dead hung out) — fabulous food, ambience up the yin-yang (literally, if you went into Chinatown), all the energy that comes from hanging out in the nerve-center of a bitchin’ city like San Francisco.

Plus, witnessing Deutsch attempt to murder Garf with an IED of olive oil and glass was just priceless. Later, we all made up and toured Carol Doda’s old haunt for laughs, along with the new “Beat Museum” (Ginsberg’s typewriter!).

Ever had a Chinese foot massage in a room filled with top Web marketers, all half-drunk and giggling?

I’m truly sorry you missed this event, I really am.

We may have a few video snippets to share with you, soon. But we will not be releasing the DVDs of the event (like we have for the other seminars/sweatshops I’ve held).

Naw. This one was too special. For now, the hot stuff is staying in the vault.

And I’m gonna bask in the warmth of having pulled it off for a little while here.

A little creative gloating. There hasn’t been anything in any of the other marketing events you’ve heard of… that is even remotely close to what was shared in this workshop.

I wish you coulda been there.

PS: Just a note to the curious here — the schedule for the much-desired “Launching Pad” coaching option (what we call around the office “Be John’s New Best Friend For A Month”) is starting to look like the 405 during the morning commute. In other words: Packed.

Over the past months, while we’ve been on the road (to Kern’s “Mass Control” event, Eben’s “Altitude” spectacular, Schefren’s Orlando seminar, and everywhere else we’ve been traipsing around) people have aggressively cornered Stan or me and grilled us on the availability of this super-intense consulting opportunity.

If even a fraction of those folks follow up, we’ll be booked solid soon. It’s first-come, first-served, though… so, while there are spots on the schedule, you have a shot.

Check it out at http://www.carltoncoaching.com.

How To Communicate Incoherently

Monday, 6:56pm
Reno, NV
“When we remember we are all nuts, the mysteries disappear and life stands explained.” Mark Twain (sorta)

Have you seen my partner Stan’s first information video?

I think you need to see it, if you’re interested in mastering communication (which is the life-blood of selling lots and lots of stuff).

Personally, I find his video fascinating. He’s getting a ton of feedback on it, and we just spent an hour on the phone talking about it. One guy sent him such a personal email that Stan called him… not to argue, but to get the background story on why the guy had the opinion he had.

It was a calm conversation, Stan tells me… yet, at first, it was like sharing a bench on the fourth floor of the Tower of Babel. Each person was saying something important, but mere words didn’t seem to be able to get any points across.

I’m laughing my ass off over this as Stan tells the tale.

Cuz this is all about communication… and for the 25 years I’ve known Stan, we are constantly bickering about who said (or didn’t say) what, and who’s right and who’s a miserable toad for being so wrong.

It’s the foundation of our friendship.

Remember Star Trek? Stan’s like Spock, only with a sense of humor (and a taste for jazz and good beer). Very, VERY logical, and impatient with people who process info in illogical ways.

The Voodoo Of Video

You either hate… or love video.

Doesn’t seem to much of the old “in between” on this.

And I think I can clear up some misconceptions about it here in this post.