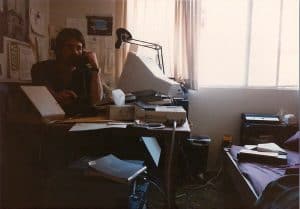 Tribute To The Ink-Stained Wretch

For most folks in America, July 4th is about picnics, blowing shit up, and toasting the gutsy nature of our country.

Born in defiance and battle, prickly and belligerent and idealistic, with built-in endless (and often absurd) political arguments…

… we’ve somehow made the grand experiment last a couple of centuries and a half.

For me, though, the real victory of the joint isn’t in the details of elections or legislation, or the question of how exceptional we are or aren’t as a culture.

Nope. My own pursuit of life and liberty has always balanced on the First Amendment…

… particularly the parts about freedom of speech and freedom of the press.

That’s the beating heart of this place. That’s the saving grace.

For every writer here… novelist, copywriter, journalist, blogger or disgruntled “letter to the editor” ranter…

… there is a long, gruesome pedigree of ancestor writers who were prosecuted or erased or bullied into silence, stretching back as far as history goes.

We’re so spoiled here with freedom of speech, that many naively believe it’s an essential privilege that, of course, is the rule and not the exception.

Yet, the opposite is true.