How To Murder Anxiety 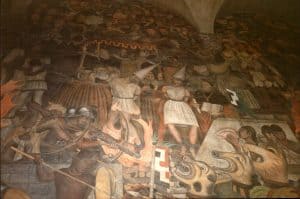 One of the best Zen lessons I ever had busted over my head was the role of anxiety in our lives.

Something does or doesn’t happen that tweaks your mojo, your stomach knots up, you sweat like a pig, you get get brain-vapor-lock and can’t stop obsessing over past and future events.

Then… suddenly… a fresh crisis occurs.

You receive an emergency phone call, zombies attack, some doofus rear-ends you in traffic, the dog gets in a fight with a rabid squirrel, an earthquake knocks over you and the furniture, or whatever.

Your mind is instantly freed from the anxiety, as you marshall inner resources to deal with the immediate incoming shit. (Killing zombies is hard work.)

This proves your anxiety is an invention of your own bad-ass mind. A concocted fear of things outside your control.

You’ve done it to yourself.

Later, calmer, you can deal with the original anxiety-provoking situation. Apologize, clean up the mess, make amends, pay your penalty, accept the consequences…

Anxiety is an invented state. You can also beat it with hard-core exercise (or a few pints)…

… but the main realization is that you can beat it.

Strangle it at it’s worst, crush it like a bug even as it crests in your system.

It might take some practice. Without the intervention of good tactics (like good old Americanized Beat-inspired Zen), you can spend your entire life shackled to the whims of your super-ego. That nagging voice telling you you’re not good enough. That vague sense of impending doom and failure, no matter how experienced you’ve become at something. Feeling like an imposter about to be revealed, like a criminal about to be exposed, like a pathetic twerp deserving ridicule.

It’s all bullshit. There are warring sub-personalities inside your head, and too often the wrong ones win.

You have SO much more input than you realize, if only you’ll take back the control room in your brain.

Write your own script for a change, and let your love-light shine.

So do the usual prescriptions for dealing with it (via our overlord, Big Pharma).

It’s only hard while you’re in the initial battle with the demons refusing to relinquish control of your life… and once you get good at vanquishing them, you can stop worrying about zombies (until the actual apocalypse).

Hope you’re playing it safe during the Plague.

P.S. Be sure to check out the courses and books available here on the blog.

This is a GREAT time to get the basics of solid salesmanship (and especially salesmanship-in-print) down cold… as the world pivots to some new version of “normal” that will eat the weak and demand intense discipline from the survivors.