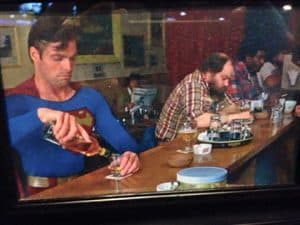 Just cuz I’m such a nice guy, I like to gather recent Facebook posts I’ve published and lay them all out here on the blog…

… so you lazy types who can’t be bothered reading social media will still enjoy the advice, tactics and weirdness I lay out for everyone else.

So here, in no particular order, is a fresh pile of the good stuff from the last month or so:

A client who (rightly) wouldn’t dream of interfering with his dentist, or plumber, or mechanic (“Here, let me drill for a bit on my molar — you’re doing it wrong”)…

… will routinely muck up and alter ad copy, no matter how accomplished the copywriter.

I’ve only had a tiny handful of clients in a 30-year career who resisted changing essential copy. The majority indulged in this ad-murdering habit (often after consulting with their English Lit major daughter, or the boys down at the local watering hole).

… but first you have to realize what’s happening. You can’t “fix” dumb, and you can’t soothe irrational rage…

… but you can (as a First Option) learn to identify who’s gonna be trouble down the road, and choose not to play with dumb or irrational players.

Seems obvious. Isn’t. If you don’t stay aware, chaos will consume you.

Why are so many top writers introverts, I’m asked.

It’s an extroverted world. Introverts, to survive, must observe, understand and adopt extroverted models. This strengthens your Empathy muscles to absurd degrees.

The basic ingredient of good, persuasive writing is (aha!) empathy.

Extroverts are under no such pressure to study or change behaviors…

… and just get pissed off when forced to deal with introverts, who seem inscrutable and closed-off.

So, at least for writing, introverts have the advantage.

It’s only fair, as the world tends to bully introverts in most other categories.

… and just laid out a good reality check. Not tell me how to live, but show me the OPTIONS.

A single freaking clue or two would have gone a long way helping my bewildered teenaged-self cope.

For example: The entire extended family was working class — we traded physical labor for wages. A noble lifestyle that valued hard work, sweat equity, and not getting too big for your britches.

However, I was a near-sighted, introverted thinker. Turning off my brain and rolling up my sleeves to concentrate on hauling, hammering, lifting and building was doable, but difficult. My dairy-owning cousins seemed to revel in it, and mocked my mental exhaustion from blocking critical thought.

It didn’t dawn on me to pursue “brain work” until I hit 32. All my energies, up to that point, went into figuring out why I didn’t fit in, pushing uphill against the micro-culture of being working class.

I finally got my own clue, said fuck it, and became a freelance writer.

And, surprise, I suddenly worked harder and with greater sweating glee than I ever thought possible. This square peg had finally quit trying to fit into a round hole.

… if I’d ever gotten a clue it was even possible.

“That” uncle I never had would taken me aside and said “Johnny, me boy, you’re different. And that’s not just okay…

… but it’s something to CELEBRATE. And pursue with gusto. Think, and write, and debate and go down dark mysterious philosophical alleys to your hearts content…

and NEVER be satisfied with mediocrity.

Or conformity. Just don’t expect anyone to applaud your choices. You’ll catch grief all the way… and that’s to be seen as a badge of honor, not shame. Go your own way, and let your freak flag fly.”

That’s all most of us need in life — a clue. A hint that we’re not wrong to want something else, or abnormal to not even know what you want yet…

… but that it’s okay to wander away from the herd to find out.

I’ve met precious few people along the way who qualify as “that” uncle. So we can all use one.

This is why I write these long posts, and have kept the blog going for ten years. It infuriates some folks, but I’m writing for those who can use the advice and clues.

The truth is, going your own way won’t always make you rich. And you gotta be okay with that, if you’re gonna unleash your brain and heart.

Cuz sometimes, you will stumble upon wealth and happiness you cannot even comprehend now.

Life is one long risky adventure. And if you think you can make it safe and without drama, you’re deluded.

Much better to embrace reality, prepare yourself for the game, and work hard on a solid, ethical and deliriously happy ride.

Big bonus if you help others and make the joint a better place.

Do you have smart friends who always seem to make dumb-ass decisions?

Are — ahem — YOU one of these miscreants yourself? (Confession: I am. More often than I care to admit.)

Well, gather ’round. I believe I’ve stumbled upon a solution.

Here it is: When you have an important decision to make…

… just ask yourself this simple question: “What would a smart person do?”

Then, go do that.

Do NOT (as so many of us somehow seem to do) ask “What would a blithering idiot do?”…

No, no, no. This is your self-intervention moment.

Don’t be the blithering idiot.

Do be the smart person.

Sounds too simple and obvious to work, doesn’t it?

Random thoughts I probably should just keep to myself: It’s the birthright of every American to bitch and moan about how things are run.

Heck, the country was birthed in a snit, and didn’t last a generation before dissolving into civil war.

… but it’s infinitely harder to roll up your sleeves and actually get something done.

… and they’re suddenly faced with the harsh reality of their doofusness.

It’s similar to the look the drunk who thinks he’s a great singer gets when he finds hisself onstage with a karaoke mic, exposed for the clueless wreck he actually is.

The world is divided into 3 groups: Those who know what they’re doing, and do it well.

Those who don’t know what they’ve doing, but figure it out.

And those those who refuse to acknowledge they are incompetent maroons, yet insist on being in control.

This is why true experts like to hang out with each other. Because the rest of the time, they’re dealing with aggressive stupidity, misplaced overconfidence, and stubborn ineptitude.

Let the bitching and moaning commence.

No one can predict the future, but the universe always lays out hints…

I may have stumbled onto a scientific way to add MASSIVE productivity to your week.

It’s just freaking amazing how awesome this tactic is.

In fact, it adds the equivalent of a entire EXTRA day to your workweek!

Wanna hear what is?

Here’s the secret: I woke up today thinking it was Friday. Was kinda bummed that I hadn’t accomplished quite as much as I’d intended to this week…

… until I discovered it’s actually Thursday.

Think I’ll use this found time to goof off.

I mean, I earned it. Being a productivity scientist and all…

If you agree with everything you read… then you ain’t reading the right stuff.

There’s a baked-in bias in our brains that seeks consensus. And that’s fine for civilians, whose shallow thinking usually causes little damage outside their social circle.

But when you’ve swum into the deeper part of the pool — whether in biz, politics, or celebrity — each new decision and action is fraught with larger consequences.

It’s fine to be hard-headed when you actually know what the hell you’re talking about.

It’s pretty screwed up, however, to take your industrial-level naïveté (the polite word for raw ignorance) onto the Big Kids playground where maroonity is challenged and a real handicap to getting shit done.

Read more stuff that pisses you off, but don’t GET pissed off. Instead, walk a mile in their shoes, and try to determine what is actually rankling you.

Our default internal mechanism of blindly rejecting the Other represents the worst of our tribal tendencies. The grand arc of civilization has been a relentless battle against that destructive thinking, but it requires disciplined effort.

Surrounding yourself with people and info sources that agree with you may seem the comfy way to go.

But it’s a trap for anyone seeking to live fully and with gusto.

Life is rife with challenges. Instead of dodging them, embrace them.

It may make your brain buck and resist at first, but growth is never easy.

If growth bothers you, best to swim back to the shallow end.

And that’s it for this session, folks.

P.S. Don’t forget to solidify your position as a true bad-ass in your niche…

… by quickly learning how to write everything you need to persuade, sell, and nurture your customer base AND your future prospects.

Best way to pull that off: Take the Simple Writing System at-home program.

At your own pace, using your own best learning style, we’ll simply and efficiently install murderously-good writing skills into your brain.

No matter how stubborn you are, or how convinced you’ve been that you “can’t write”. That’s nonsense. We’ve taught thousands of entrepreneurs, biz owners and rookie writers how to write at the most awesome level possible…

It’s time to up your game.

See what the fuss is all about here.