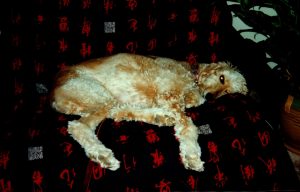 Quick little diatribe today, on the main stark difference between folks who get stuff done in life…

… and their buddies who never seem to get any traction on reaching goals. (If they even have any goals in the first place.)

This is one of those “duh!” lessons you think is obvious… until you realize just how many of your fellow humans are completely oblivious of it.

O. Blivious. No clue whatsoever what’s up, or how it’s affecting their life.

For me, this lesson literally rolled me out of bed.

Or off the couch I was sleeping on at a buddy’s house in San Diego, which was the closest thing to a “home” I had at that point. I was living out of my car, having lost my job, girlfriend and place to live all in one hellacious month-long period of chaos… and I hit the road, with zero clue where I’d end up when I ran out of gas.

The thing was, I had one of those blinding epiphanies that abruptly change your future forever.

I’d lived my entire life, up to that point, basically as a slacker — knocked about by forces that seemed beyond my control, taking jobs that landed in my lap, bouncing around the coast hoping something — anything at all — would trick, convince or force me to settle down “and start my life for realz”.

I was like flotsam on the surface of the ocean, buffeted about by tide, wind and waves… rudderless, aimless, clueless.

At some point in my adult years, I just assumed you settled down and began living in earnest. Nobody teaches this shit in school, which isn’t surprising.

But the startling fact that nobody teaches this in real life, either, is disturbing.

I’m sure you, or people around you, have labored under similar burdens of dumb-ass beliefs. I’ve been to many of my high school reunions (it’s kind of an ongoing science experiment), and the most common refrain I hear (now that we’re bumping up against number 45) is: “What the hell was that all about?” Folks have little or no idea how they got married, held the same job for decades, and never got around to knocking off any of their Bucket List items.

Which is fine for most people. Life is confusing, wonderful, terrifying and glorious in most instances, if you make it to geezerhood without dying or landing in the hoosegow for an extended stay. Raising some decent kids, enjoying the fruits of modern civilization, and adapting to the shocks and bad news inherent in life is often enough.

For some folks, anyway. Maybe most.

Want to learn to be more proactive in life & biz but are not sure where to start? Start by getting my free report “11Really Stupid Blunders You’re Making With Your Biz & Career Right Now.” All actionable stuff that will get results in the real world. Get it free right here.

If you lust for more… however you define “more”… you won’t be happy letting life shuffle you around like that.

You can tell you’re part of the “need something more” minority if you have a real goal. Not a vague, hazy goal… but one or more well-defined, easy to visualize goals that make your heart beat faster.

What happened to me, on that lumpy couch (with my twenties in the rear view mirror, and no idea what lay ahead), was the realization that there would be no outside intervention in my life. Nothing would “happen” that delivered me into “real life”, or that would help me easily decide on where to live and what to do and how to do it well.

Nope. If anything was going to change in my life… it was totally up to me. Nobody else. No goals would arrive in the mail, stapled to plans on achieving them. The rest of my life could either be more of the same slacker-city clueless wandering…

… or, I could start considering what I actually wanted. And go get it.

That alone was enough of a realization to change me forever. I’d never understood what a real goal was. The concept that I could actually want something… just go ahead and lust for it, desire it and admit I needed it…

… and then — ta-DA! — put that plan into action, so the goal would soon become real…

Part of my plan included becoming a highly successful freelancer and consultant. It wasn’t an easy path and I made every mistake in the book, but you don’t have to. Not when you have all the secrets and shortcuts I reveal in the Freelance Course.

It’s fundamentally the difference between being “reactive” and “proactive”.

Look those words up, if you’re at all unclear on the meanings. Here’s the way I’m using them:

Decision-making style #1: Being reactive means you act only in response to an action taken toward, against or around you. A job offer appears. Do you want to be an office worker in that biz? Is the salary something you can use to make your life better? Are you gonna take that job regardless, because you don’t know if another offer is coming from somewhere else? Are you gonna marry the first person you kiss, because you don’t know if anyone else might come along? Did you buy your last car because your old one died and had to be hauled off? Are you eating at MacDonald’s again because you’re hungry and there it is, all full of greasy, fatty burgers and fries?

Reactive people essentially are standing on the path of life, waiting for something to jostle them off their spot. They dodge opportunity, and duck when decisions need to be made. Others make decisions for them. They go where they’re told to go.

Decision-making style #2: Being proactive means you look at the options you have… all of them… and keep your ear actively attuned to more opportunities, all the time. A job offer appears, and so what? There are lots of careers out there, including creating your own biz and being the boss. Or defining your “job” however you like, and demanding staggering compensation your client (or boss) never considered before. You figure out what you bring to the table, keep adjusting and filling in the gaps (of info, skills and experience) so you become more valuable in the world every single day.

And you buy the car you want, when you want it, at deals you easily negotiate because you’ve learned the inside game. You eat well, respecting your body and knowing how your appetite works (so you’re never surprised by being famished, forced to eat crap in a panic).

And you marry or don’t marry based on deep understanding of the consequences, joys and commitment requirements of doing it right, with the “right” person.

You don’t settle. You don’t operate out of fear, because you know the world is a place of abundance.

If one option vanishes, others will appear pretty damned quick.

IF you’re proactive about it.

Proactive people are moving rapidly along their chosen path in life, always monitoring progress and satisfaction. They want something, they make a plan to get it, and then put that plan into action. If they later change their minds (common experience of veteran goal-seekers), no problem — you really can change horses in the middle of a stream, IF you know how to do it.

The choice is pretty stark:

… or you take over the responsibility for it.

That scares the living bejesus out of most folks. Being told what to do absolves you of responsibility for consequences. Hey, shit happens, right? Not my fault, I’m just following orders.

And that’s fine, if it’s the way you wanna roll. The world needs grunts.

But if you want to forge your own path, and go after loftier things in life… then you need to get your ass in motion.

Movement solves problems. Disinfect that wound, sew it up, and rip off the bandage when it’s healed. That right there is a good metaphor for breaking free of the half-asleep mob around you — learn the next step, and the next, and the next of any decision… and get it done. No matter how painful it may seem or be. When you’ve finished, move along to the next goal.

Achieved goals pile up quickly when you take control.

I still fondly remember the first goal I met, back when I started my career as a freelance copywriter. It was a mild hope that I could get 3 months ahead in the rent. I’d never had that kind of cash in a bank account before. When I realized one day (around 6 months into my adventure) that I’d done it, something shifted deep inside me. I’d done it all by my lonesome, figuring it out, putting my ass on the line, finding clients, fulfilling the jobs, making the gig happen.

All subsequent goals were much, much easier to nail. Because I’d broken the code on the process.

It was all vastly simpler than I’d ever dreamed. All I’d lacked was a clue — the concept that I could desire something, make a plan to get it, and then put that plan into action.

Proactive vs. reactive remains the biggest dividing line between the movers ‘n shakers in life, and the “go along to get along” dodgers and duckers.

I still have loads of both types in my life, as friends and colleagues and family. Love ’em all, regardless of their primary mode of operating. I don’t judge, and don’t care to try changing anyone.

But I will lay out the lesson, whenever it’s relevant.

When you’re ready, you’ll figure it out.

P.S. Looking for more ideas to help you grow your biz & live a happier, healthier, & wealthier life? Check out this little page of resources.