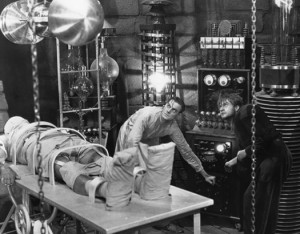 There are a ton of marketers making a ton of money, both online and offline right now… selling pure, uncut crap.

Nothing new about this. Back when the first caveman discovered the art of salesmanship while convincing another caveman to buy his old cave for a slab of mastadon meat… the next transaction to happen was probably a scam.

Like maybe trying to sell a fake cave. Or a cave with a bear sleeping in it. “Oh, didn’t I mention that bear? Sorry. And no, you can’t have your slab of meat back.”

The thing is, our capitalistic system allows for rapid financial reward regardless of whether you’re selling quality goods… or crap.

That’s why there’s never really been a truly “free” market. The moment someone with any power got scammed, laws were written and scofflaws were tossed into newly constructed hoosegows.

(Did you know, by the way, that the early European settlers in New England didn’t have anything resembling a jail for over a century? One colony tried digging a pit, but the prisoner escaped. We’ve come a long way, now with more folks per capita behind bars than any other civilized nation on the planet. Just something to chew on…)

Anyway, when you’ve been around business as long as I have — and I’ve been around a loooooong damn time — then you start to notice certain things that keep happening.

Like, for example… the cyclical return of the predatory multi-level marketing monster.

I’m not gonna name the current MLM goop out there, cuz it’s irrelevant. If it wasn’t this particular recipe of selected tangy herbs and zombie-ized crap, they would have found something else.

I’ve lived through three or four of these cycles. Lots and lots of money is made by some folks, and the buzz on the goop gets so hot that eventually stories appear in all the major magazines. (The same stories, pretty much, too. “Is this stuff for real?” the writers ask, all agog at the money and perplexed about the claims. God forbid they do any actual research on the goop…)

During the last go-round — in the late ’80s — the company behind that particular goop even bought a huge skyscraper in Los Angeles, and was drawing up plans for world domination just before the roof caved in on them. (MLM health-goop crashes happen just like the Dot-Com bust seven years ago — suddenly, taking whole groups of people down in financial chaos… and later, when the dust settles, it all seemed so obviously dumb…)

So allow me to set you straight here, in case you’re a little unclear on the concept: When it comes to maximum health, there are just 3 factors.

I hate to bust your bubble… but there ain’t no magic concoction out there that will cure your ills and make you live forever. At best, you may be coaxed away from your bad lifestyle, and introduced to the fundamental nutrients you’ve been avoiding, which may help a lot. (Amazingly, leading an unhealthy lifestyle actually contributes to ill health!)

At worst, you will be engaging in the power of suggestion and placebo… which also can work wonders for someone who strongly believes in magic.

In the end, however, if what you desire is good health and long life, you need to get hip to your body’s schematic. For every uncle you had who lived to 101 guzzling whiskey and chain smoking, you’ve got to factor in the four other tea-totaller relatives who dropped dead at 40 from heart attacks. That’s infomation.

Good living can be defined however you like… but in the end, it has to translate to being a better animal.

Exercise, eating well, indulging in a full life… we all slack off on the things we intuitively know can make us happier and healthier. So stop it.

Finally, if you need a little magic to make sense of the world, then by all means go for it.

Whatever floats your boat.

But please — don’t fall for the scams.

So listen carefully: This type of magic elixir comes around like clockwork every generation.

And here’s how it works:

The goop is irrelevant. It could be (and sometimes has been) pureed compost heap. (The term “snake oil” comes from the common mid-18th century potions made from fermented rattlesnake heads and alcohol. Yummy.)

The ingredients do not matter.

What does matter… is the pitch…

…and the choice of marketing organization.

The easiest way to generate a lot of money, fast, is to use the multi-level organization. I swear to you that many of these guys set the organization up first… and THEN go looking for some goop to plausibly fill the minor role of “product”. (They stay with herbs and “natural” ingredients to avoid the wrath of the FDA.)

MLM success is based not on actually selling the product…

…. but on convincing others to sell it for you. So you sit at the top of your own private pyramid, doing nothing but cashing checks, while your minions scurry about below either hawking the goop… or creating their own little pyramids of sub-sellers.

And you get a piece of all the action filtering up through your seat on the pyramid.

Most level-headed people, upon hearing of how the MLM scheme plays out, pause.

The organization seems to defy a basic law of the marketplace — if the goop is really as good as the pitch says it is… then why is the emphasis not on selling it, but rather on getting other people to sell it for you?

To go into the logical curli-ques of the MLM pitch would take many pages.

Because, after the organizational set-up, the next most important part of the scheme is the pitch.

And, when done right, that pitch will exhaust your brain, murder your intuition, and leave you believing that black is white. Reality and fact be damned.

It’s only job is to generate enthusiasm. Enthusiasm for all the money you’ll make, so fast and easy, coupled with your new ability to live forever by guzzling this delicious new goop.

Whatever the goop is.

MLM is all about the suspension of belief… so, in your fevered excitement, you begin to believe that YOU — yes, YOU, among all the people who have sought it from the dawn of time — have been chosen to be among the blessed few to finally — FINALLY — discover the Fountain of Youth.

And you deserve to made rich for doing so.

You may as well join a cult. Because the brainwashing will never cease, and you are in for a ride that will not end until you are forced to face reality again.

Some people will get rich. That’s a given — it’s the reason the “snake oil” miracle remedy has been part of civilization since cockroaches decided to partner up with us.

We all want that simple, easy answer to our problems.

We all want magic in our lives again.

And we’ll PAY for it, by golly.

MLM schemes have a half-life of many years. Unless they are careless — and a good organization will avoid saying anything in their pitch exposing them to easy prosecution — they will not be brought down by any legal action. You can’t legislate the yearning for magic.

Mostly, they just peter out. Some hang around in the shadows for generations.

Hell, some even have some half-way decent product to sell.

Hey, for some people, it’s a way to dip their toes into the business world, I suppose. Maybe a way to make a few extra bucks. (Though studies confirm that the average MLMer never makes back their initial investment.) (Which they probably paid to a relative, or someone at work.)

The thing is… you gotta get clear on how you define “success”.

If all you care about is making money, then go smuggle drugs. Tons of cash in that line of work.

If you want to have a legitimate biz, then strive to make it a good one. And watch who you’re learning from.

Just know this: There are mobs of marketers out there earning boatloads of money… selling crap. Not just the MLMer’s, either.

If your chosen mentor or teacher bases his pitch to you on the idea that he has made a lot of money, then do a little digging. Especially now, with the globalized reach of the online business world, it’s EASY to make a bundle selling shoddy, screwed up goods and services.

Because, again, the product often doesn’t matter. The pitch hits your hot buttons… and the organization attaches an umbilical cord to your wallet and starts siphoning up money.

Look for quality. Look for honesty, integrity, and a product that does what the pitch promised.

You can admire an organization’s ability to round up a herd of prospects, and a pitch’s masterful way of harnessing cash.

But you don’t have to admire the people behind it all when they’re selling crap.

We live in a world filled with illusion and greed and clever thieves.

Watch your ass. And skip the goop. Go buy a blender and some cheap but good protein powder, eat more fruits and veggies, and get off your butt more and go do stuff that makes you sweat.

And if you truly desire to get rich, you can do it with your head held high, selling quality products and offering damn good services.

I shouldn’t have to keep reminding you of this, you know…