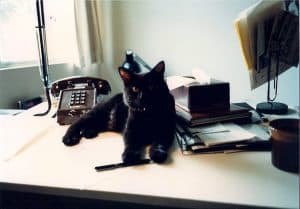 It took me an awful long time to figure out that — to get anywhere in life — I would have to buckle down and actually get good at something.

That was a painful realization. I was thirty-two at the time, no longer young, no longer having fun doing the things that had pleased me so thoroughly just a year or so earlier.

I was done with having potential.

Potential can murder your life.

All through my formative years, I was given special attention because I could draw well (I had weekly cartoon stips in both my high school and college newspapers) (even won a Quill & Scroll award)… had some musical ability (my ragged bands played for friends’ parties and at school dances)… and evidenced a little precociousness with my fiction writing.

Relax. I sucked at fiction. I wrote complete stories, was all. On my own time. This amazed teachers, but it wasn’t anything all that great. Any early signs of authorship had absolutely no correlation to copywriting. In fact, it probably set me back a couple of years.

As I’ve often said, it’s easier to teach a near-illiterate salesman to write good copy, than it is to teach salesmanship to someone with a Ph.D in English literature.

But back then, I was just good enough at several creative skills to suffer the curse of potential.

You know what potential does? It gets you credit for not actually doing anything difficult. You get used to the easy accolades… and never develop good work habits, cuz it’s no big deal for you.

During my days hanging with the “D” list Hollywood crowd, I saw the ravages of potential up close and personal. Most of the folks who’d ever been praised for a small acting gig, or had a bad TV screenplay optioned, or had scored a “meeting with John Candy’s people”… coasted on that cloud for as long as possible.

For many, their brush with success became a standing joke. We’d make bets on how long they’d wait before bringing it up to someone new. (Average time: About three minutes.)

If I was in charge of the world, I’d take every kid with potential aside… and clap them all into a boot camp, where we’d wipe that smirk off their face. And make ’em earn some real kudos.

It’s the only way to save most of them.

The most vivid example of potential versus reality I ever saw was down in Miami Beach, after it’d become a hotbed of the fashion world. Every day, several buses would arrive, crammed with young women who were the best-looking creatures who’d ever graced the small town they’d just come from.

And it took about an hour for them to realize that, as god-like as they were treated back home, here in the center of the model universe, they weren’t even on the map.

So the person with a little “natural” talent at something may have a tiny advantage over the raw rookie who never heard the term “potential” tossed their way.

But that tiny advantage is irrelevant… unless it gets honed into a big advantage.

And guess what? It takes just about the same amount of hard work to hone a little talent, as it does to go from zero to hero.

Never let your perceived lack of natural ability stop you from trying something.

I’m thinking about this, after seeing Bela Fleck, Stanley Clarke and Jean Luc Ponte at the Hawkins outdoor amphitheater tonight. Stunning expertise there — on violin, gut bass, and jazz banjo.

They were dressed casually, they didn’t require any formal introductions, they joked and were at ease with each other and the crowd while they played.

And it was exquisite.

These guys are experts. And if you listen closely, you can catch pieces of Bach, Mahavishnu Orchestra, Coltrane and Weather Report licks thrown in, as teasing references.

Nice stuff. I’ve been following these musicians, separately, for thirty years. They were damn good back then. They are transcendental now.

Earlier today, I hung out in the kitchen while a new repairman took apart the built-in microwave, found hidden ice blocking the fan in the freezer, and showed me the right Allen wrench to use on the locked-up garbage disposal.

I thoroughly enjoyed watching him work. In another life, I could have happily been an odd-jobs artist… going deep into the mechanical flotsam of our lives.

He had a complaint — he’d hired, and fired, almost twenty different guys in the past year, trying to find someone who could handle some of the repair work for his thriving business.

The problem was best illustrated by the last guy — who wasted forty-five minutes trying to remove a plastic cover inside a broken dishwasher door… and finally brought the entire door back to the shop. He insisted it was permanently welded shut. The boss took it apart in twenty seconds.

“The thing is,” he told me, “that guy should have been humiliated. But he wasn’t. These rookie repairmen all want me to teach them the specifics of doing each job… but it ain’t like that.”

“It’s the process they need to learn,” I said.

“That’s right. Not the details of just that one job. They need to fall in love with figuring this stuff out.”

“It’s the same with advertising,” I said. “Great ads are the result of great sales detective work. And few want to put in the sweat.”

“Damn straight,” he said. And refused payment for fixing the fridge. Said it was his pleasure, because he enjoyed talking to me as he worked.

So… I’ve been thinking about expertise. What it is, what it takes to attain it. And what it means, after you have it.

And while I’m thinking… I get an email from someone that says: “Hey John. I want to be a world-class copywriter. What do I do to get started?”

And it dawns on me. Finally.

There’s a great quote I like: Learn your craft first. It won’t stop you from being a genius later.

The musicians tonight displayed genius, yes… but they expressed it through a master craftman’s skill level.

The repairman seemed to be working magic, listening to the freezer and finding the exact problem as if by divining the source. But really, he was just using the skills of his craft — figuring things out.

I’ve argued before that Picasso ruined painting. Not on purpose, of course. He went off on a totally bitchin’ tangent that riveted the world.

But everyone who learned painting after that, started with Picasso’s abstracts. They completely ignored the fact he was an accomplished realist, first. Knew his craft.

He broke the rules, only after showing he was a master of those rules.

The minions who followed, showed little consciousness of any rules at all. They want credit for being creative… “like Picasso.”

They want you to gaze at their crap, and fathom the potential there.

Because, you know, it’s abstract.

But they lack real craftmanship.

But not in marketing.

All the top guys are super-skilled craftsmen at their job. They learned to write well, and they learned the essentials of great marketing… sometimes painfully, taking however long it required.

There are shortcuts to the gig… but you still have to patiently learn the craft first. This is the thing so many rookies can’t quite get a handle on. You don’t just become world-class because you really, really, really want it.

Be a craftsman. There’s some transcendental joy in knowing you’ve mastered something beyond the smirk of potential.