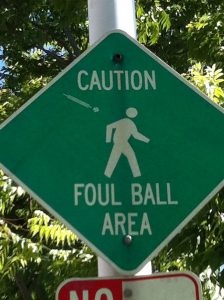 Have you read Gary Bencivenga’s latest “bullet” newsletter? It’s at www.bencivengabullets.com — and the story told there is so uplifting that Gary Halbert reproduced it in his newsletter (www.thegaryhalbertletter.com).

I’m a sap for good inspirational stories. It’s one of the hazards of being in touch with your emotional side, which is absolutely necessary if you want to write world-class copy — hell, I sometimes tear up watching sappy television commercials. Often, it’s the snarly, cynical guys who have the biggest soft spots.

Bencivenga’s story reminded me of something in my own past I’d long forgotten about.

This was in the early seventies, in my college town. A friend asked me to help him coach a kids baseball team — there were no parents available.

This was before the movie “The Bad News Bears” was made, and I believe it’s something that has happened multiple times (and is still happening) all across the country: One team in the league is created to house all the kids the other teams don’t want. The lousy players, the outcasts, the orphans of society.

And then, a coach is lured in, also from the outside. And then the team is taken for granted as a perpetual loser, but everyone can feel good about having “given the little bastards a chance“.

In this case, our team was a true menagerie of mutts. We had a couple of kids who didn’t speak English… several obese kids who couldn’t run to save their lives… a few emotional basket cases who would burst into tears for no reason (this was before the age of heavy medication)… and the only girl in the league.

Make no mistake — as coaches, we were mutts, too.

The other coaches were upstanding parents, still sporting their crewcuts from their glory days as star jocks. They took baseball very seriously.

And there we were, my friend Bob and I — two long-haired hippies in torn jeans and “Up The Establishment” tee shirts. We did, however, share a love of baseball. We’d both played organized hardball through our teens, and knew a bit about the game.

The first practice was a disaster.

Kids showed up with decrepit gloves that fell apart with the first catch, there was rampant crying and hurt feelings, and my feeble Spanish wasn’t cutting it with the ESL kids. And no one was paying the coaches much attention.

It was chaos. Being a nice guy did not have much effect.

So, in frustration, I just decided to screw the nice guy attitude…

… and told the team to take a lap as punishment.

They looked at me in disbelief, and I had to chase them toward the far fences. They got back, huffing and gasping, and I made it clear that we were gonna do laps every time they got out of hand. And I stuck to it, too.

Was I being cruel?

Nope. I was treating them as ballplayers. And, to my astonishment, they loved it. I don’t think too many adults in their lives had set down boundaries before. These kids were, for the most part, treated as losers, and acted like it.

Out of nothing more than frustration, I had accidentally given them a taste of respect — by demanding that they stop acting like losers.

Even when, once the league started, we lost every single game in the first half of the season except the last one. At first, we got blown out…

… and then we started getting closer, even scaring some teams. The fat kids stopped wheezing when they ran, and it turned out the girl had a wicked bat at the plate. And once the emotional kids realized we were going to just ignore their crying jags, they stopped doing them. Mostly. There would be a few tears and sniffles every game, but no one tannted them or paid them extra attention.

It just became no big deal.

And I’m not making this up: The last game of the first half was against the arrogant first-place team… and we beat them by a run.

Our joy was compounded by the humiliation of the jocks in the other dugout.

It got better, too. In the second half of the season, we won most of our games. It wasn’t enough to win the league, as Hollywood would have done it, but the real victory was the change in the kids.

I never once saw any of their parents in the stands for a game, and I wasn’t about to adopt any of them. I had a lot going on in my life, and this was a one-time volunteer thing, a couple of evenings each week. Come summer, I was going to be gone.

To give you an idea of how different a time that was — and how indifferent Bob and I were to social conventions — here is how we celebrated the final game: We brought an ice chest into the dugout. Soda pop for the kids, and beer for the two coaches. And long, heart-felt hugs and slaps on the butt after the last out.

I never saw any of those kids again. I have no idea what became of any of them.

But I remember their faces. I wasn’t such a sap back then, and I wasn’t proud of my effect on them, or even really aware of it. It was a job to be done, once I agreed to do it. A challenge, to get this motley crew of losers in some sort of shape. And, if we could, to beat the sneers off the faces of the other teams.

As a coincidence, I worked as a crisis-intervention counselor for institutionalized teenagers as my next job. It was the only gig my fancy degree in psychology could get me during the Carter recession.

And, just to put things in perspective, I learned fast that the majority of kids who get dealt a bad hand in life don’t get happy endings.

You can try as hard as you can to change some things, and wind up only with a broken heart and dashed illusions. The burn-out rate of adults working with state-owned kids is near to one hundred percent.

Still, you take the little flashes of magic when you can.

Those kids on the baseball team got to experience a few weeks of discipline and the attention of two adults who — no matter how scroungy and off-beat we looked — refused to let them wallow in victimhood. Who knows what curves life threw them after that. Maybe we had no lasting impact whatsoever.

Or maybe we did. When I reflect on the people who were forces of change in my life, it’s clear that major turning points often come as small moments. A casual comment, a fleeting extra lesson, a simple nudge of acceptance.

As adults, as business owners and marketers, we tend to believe we have to be tough as nails all the time. There’s even more pressure to be a rock when you lead others.

And it’s easy to forget just how fragile we are, as humans. We can be brought to our knees by microscopic bugs, rendered destitute by events we never see, decked by the uncontrollable forces of nature, fortune and destiny. And you’re vulnerable no matter how rich, or strong, or important you are.

But it works the other way, too. The power of a short phone call, an unexpected letter, or a visit “just for the hell of it” with someone who’s down can change history.

I’ve advised every writer I’ve worked with to strive to “be that one thing your prospect reads today that gets his blood moving”.

And that’s not bad advice for your personal life, either. Be that one person who is willing to share a moment — no matter how brief — with someone who needs your attention. Unlike business transactions, there may not be instant results.

You may never know what your actions accomplish. And, in truth, you shouldn’t care. You don’t reach out to others because there are rewards. You reach out because you can.

Have a great holiday.