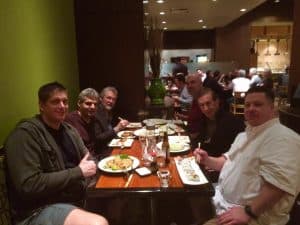 Several years back, Mongo and I were road-dogging with Gary Halbert in Beverly Hills, looking for a new-fangled television option that had just become available…

… allowing you to project video images onto a huge screen in your home. This was ages before 70″ HD TVs were even a glint in a Samsung engineer’s eye.

As usual, Gary needed to find out every detail of this wondrous new contraption. He loved cameras, movies, and all interesting new technology… especially when it promised to entertain him.

Hanging out with Gary meant exploring the world deeply, with gusto.

Also with lots of irreverence.

We parked on Sunset and wandered across the street to an audio/visual store, where the awesome new projector TV was being sold. Several salesmen descended on us immediately, ushering us into a special room displaying the magic.

We stood there for a few moments, watching some soap opera show play out larger than life on the screen. It was pretty impressive.

Mongo and I looked at each and raised our eyebrows. We both had the same thought.

Gary nearly choked, laughing. I grinned at the salesman, nodding.

“I’m gonna buy this thing,” said Gary. And he did. But not until after the demonstration.

So we watched some late-nineties grind-and-slobber video for a while (much more intriguing than the soap opera crap) before getting bored and wandering back outside to see if there was better trouble to get into.

Because that’s what we did, Mongo and I, when we were with Gary. A little research, a little exploration, a little visit to the tavern next door to share tall stories and see what else we could get into on this fine sunny day in Southern California.

Mongo is, of course, my great pal and cohort Scott Haines. After I’d done my several years being Gary’s main road dog, Scotty took over. We both were thick as thieves with Gary, traveling around the country to seminars and biz meetings and chewing up scenery in as many different cities as possible. Miami, San Diego, Key West, Phoenix, LA, Orlando, New York city… it was an education in how the U.S. was cobbled together, as much as an ongoing lesson in dealing with clients in every type of market imaginable.

Scotty earned the prized nickname “Mongo” after the Alex Karras character in the movie “Blazing Saddles”. Scotty was a short, broad shouldered, incredibly strong man — with martial arts skills that would have made him fearsome, if he wasn’t also saddled with a heart as big as any man I’ve met. If you were Mongo’s friend, you had someone who would watch your back and sacrifice himself without hesitation when the chips were down.

I valued him as a pal, and also as a colleague. He was a brilliant copywriter (the only way you could get the road dog job with Halbert), and understood the marketing game as well as anyone. He arrived into our world from Tulsa, Oklahoma in the late nineties…

… suffering some serious culture shock moving near Gary in Key West, and then Miami and Hollywood. Sort of a trial-by-fire for a young man eager to tackle the big wide world on his terms.

Scotty and I got along famously, liking each other on first sight. Writers are like that, you know. The “tribe of scribes” is an ancient guild, going back to the beginning of civilization. We’re the dudes and dudettes who get the stories down on paper, who translate the culture into novels and ads, who keep watch over the way history is tracked. It’s a lonely gig, often just you and the blank page…

… and that inherent loneliness bonds us together. We know the drill. We understand what goes into the process, how tough it can be even while seeming like we’re goofing off driving around Hollywood destroying shit.

Writers love to hang with other writers, cuz we never need to answer the question “how do you do it?” We get to skip past the mystery and incredulous quizzing, and just move straight on to our other main job: Drinking and making each other laugh so hard it hurts.

Mongo remained a close friend with Gary, as did I.

And when I decided to become a guru, writing my books and courses and hosting the now-legendary “Copywriting Sweatshop” seminars, I didn’t hesitate to ask Scotty to be my sidekick. He was there for the first three seminars, right beside me, as I faced down 40 marketers who paid $5grand each to have me critique and fix their miserable ad copy. They expected a lot. We delivered more than they ever dreamed possible.

He also was one of the first teachers we hired to honcho a classroom in the Simple Writing System. His students adored him, and he became good friends with many of them.

When I had a problem myself, whether in life or biz, Mongo was one of the first guys I called. Level-headed, despite his shocking appetite for good booze. Fearless when facing problems, despite being a shy introverted giant.

He was the most fun, thoughtful, and generous man I’ve ever known.

And he’s gone. Left this mortal coil today at noon Tulsa-time, surrounded by grieving friends and family, to go see what Gary’s been up to in that Big Marketing Joint in the sky these past ten years.

He was just 46 years old, far too young to leave us so suddenly. The entire writers’ community is in deep shock, emotionally shattered by the passing of a beloved colleague, friend and cohort.

I talked to him the day before he left Austin for Tulsa, to visit with family over Christmas. Twenty-four hours later, he suffered a massive stroke, and was on life support for almost two weeks before his family was convinced by the docs to let him go.

I can still hear his thunderous laughter. We joked and shared old Halbert stories during that call, howling at the misadventures and insanity that wonderful man could generate. It was two longtime pals, talking like we always had. I expected to talk to him again this week, when he got back from the holidays, maybe meet up somewhere for fresh adventures.

Those adventures will have to wait, now.

I’m not a religious man, but I do have a raucous spiritual side, and you can’t tell me I won’t see both Gary and Mongo again, somewhere. In due time.

Life is wondrous, but also heartbreakingly fragile… and you can never predict what the morrow will bring.

Scotty lives on in our hearts, of course. In that ever-growing place where those who have left remain with us. So crowded, that special place.

But that’s what happens when you live large, and embrace life fully. You collect friends, you love them, and sometimes… they have to leave early.

… Mongo has left the building.

I love and miss you dearly, pal.

For the rest of you:

P.S. Feel free to share your own Mongo stories in the comments here. His very large group of fellow writers have been supporting each other since Scott went down, and while we’re grieving, we’re also laughing through the tears… sharing the funny, embarrassing, wild stories and memories of the big guy.

He was a force of nature. A damned good friend.

And someone we’ll all miss for a very long time…

UPDATE: Big Jason Henderson, one of Scotty’s best pals, set up a GoFundMe site to help with the funeral and hospital expenses Mongo’s family is now faced with.

Go here if you want (and are financially able) to contribute. Doesn’t matter how much. Every penny is appreciated.

You are invited to leave comments and stories on the page. You’ll see that many of Scotty’s cohorts, clients, colleagues and many notorious and famous friends have already done so…